I put the sequel to this book, Gemina, on my want-to-read list after reading the Book Smugglers review of it.  (Those Book Smugglers!  Always lengthening my list!) I started this one when it was nominated for a Cybils Audiobook award, and am happy to say that it is a Cybils Young Adult Speculative Fiction Finalist. 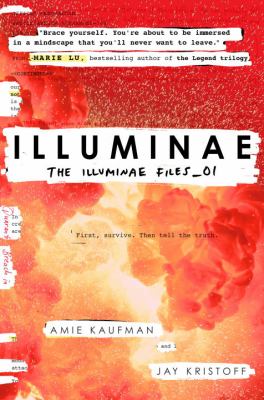 Illuminae by Amie Kaufman and Jay Kristoff. Alfred A. Knopf, 2015.
Breaking up with your boyfriend is a bad enough start to the day, but Kady’s day gets even worse when her planet is bombed and she has to flee her high school.  With the ex-boyfriend, Ezra.  OK, it was an illegal mining planet – but bombing is still extreme.  Through interviews, chat transcripts, private journal entries and more, we piece together Ezra and Kady’s stories.  The enemy ships are still after them.  Ezra is trained to be a pilot, while Kady uses her computer skills to try to figure out just what is going on.  It’s far from simple, as there are government secrets, cover-ups, a brain melting plague and a rogue AI – just to name a few of the factors.  Meanwhile, headings and notes at the beginnings of the sections make it clear that this is an investigation being put together for the very corporation that bombed the planet to start with.

It’s a fascinating story even if we the readers have to agree with Kady’s early assessment that there’s no good reason to bomb a planet when you could use legal paths to shut down the mining if that’s your goal. Our babysitter and teacher extraordinaire Aunt Silly pointed out that it’s a great book for kids who have difficulty reading but want to look and feel competent: at 600 pages, it’s hefty enough to give a great deal of book street cred, but it’s broken up into very short chapters with lots of white (or in some cases black) space, and the action is very fast.  There’s enough character development and deep issues to think about to keep it from being just action fluff, things like to role of government, the meaning of possessions, and ethics around artificial intelligence.  My son is currently reading this after deciding it would be a good school reading time book.

I listened to part of the audiobook as well as reading it in print.  I feel torn about it, honestly.  They tried so very hard to make the audiobook an amazing experience, with a full cast, music, and so on.  It’s very well done, but there are still a lot of unique aspects to this that just don’t translate to audio, like ship diagrams, spiral text, or just one white word on a black page.  It would work very well paired with the print book, though, especially for kids with reading issues.  I’ve been focusing on that because, having a sci-fi loving son with dyslexia, it is so hard to find print, non-graphic novel books that he will even pick up, let alone finish (that’s going to take a while here, but still!)  But this is a flat-out awesome story for every science fiction fan.

I hear the second book is even better.

I'm a librarian and book worm who believes that children and adults deserve great books to read.
View all posts by Katy K. →
This entry was posted in Books and tagged Cybils, teen science fiction. Bookmark the permalink.