I’m not going to write another review of it, but I’d like to note for the record that I recently finished reading Starry River of the Sky (which I’d bought last January) to the boy, who loved it. He hadn’t enjoyed the first one, Where the Mountain Meets the Moon quite so much listening to the audiobook, though I did – I don’t know if it was because he was too young for it a couple years ago, or if the beautiful pictures and snuggling together on the sofa are necessary to the proper enjoyment of these books. In any case, he chose The Princess and the Goblins to read together next. 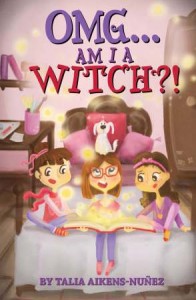 O.M.G. Am I a Witch? by Talia Aikens-Nunez. Pinwheel Books, 2013.
O.M.G. Am I a Witch? is a sweet and fluffy contemporary fantasy early chapter book. April had been having trouble with her big brother, Austin being mean to her. In desperation, she Googled “how to turn your brother into a dog” and found a spell – which worked! Now she has an even bigger problem: how can she turn him back into a person before her parents notice he’s missing? Naturally, the spell book that turned up on her first Google search doesn’t come back up again now. It will take serious plotting – even a sleepover – with her best friend Grace and the new girl at school, Eve, whose grandmother was a witch doctor in New Orleans, to solve the problems.

It’s a rare early chapter book that’s as fun for adults as it is for the target audience, so I wasn’t at all bothered at not losing my heart to this. In common with many others, this relatively short book still stretches out a short timeline with lots of breathless dialogue. It didn’t work especially well for me as a fantasy, because the first bit of magic happens before the story begins, and nothing else magical happens until the very end. It worked just fine as mostly regular fiction: the characters are believable, and the mean big brother getting a well-deserved comeuppance is very satisfying. Girls of about second grade looking for a story that’s mostly contemporary fiction with just a touch of magic will really enjoy this story. I read a review copy kindly given to me by the publisher in exchange for an honest review, and I’m now passing it on to my youth librarian in hopes that just such a girl will find it.

I'm a librarian and book worm who believes that children and adults deserve great books to read.
View all posts by Katy K. →
This entry was posted in Books and tagged Early Chapter Books, magical realism. Bookmark the permalink.