Anne Nesbet is another author I discovered through the Cybils, before I was a judge.  Her latest book is out this month and will be eligible for next year’s Cybils. 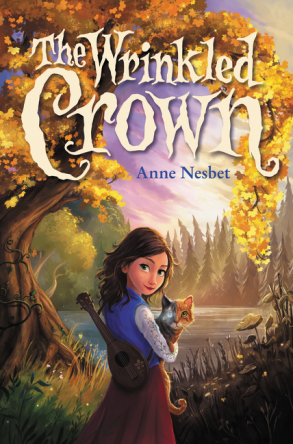 In the Wrinkled Hills is a town named Lourka, famous for a lute-like instrument also called a lourka.  The town is in the Wrinkled Hills, where things that seem straightforward will suddenly “wrinkle” and go magical. In that town lives 12-year-old Linny, tethered to another girl her age since she was tiny, because Linny’s personal wrinkly talents tend towards music, which is decidedly dangerous. Naturally they’re best friends by now – but when Linny’s impulsiveness and desire to have a forbidden lourka puts her friend in danger instead of herself, she sets out on a quest to save her friend.

What at first seemed straightforward if challenging gets more complicated.  Once out of the Wrinkled Hills, Linny discovers that she looks exactly like a girl of prophecy.  One side wants to lock her up and the other to make her be the girl of prophecy – either of which will prevent Linny from rescuing her friend.  She’s accompanied on the way by an annoying admirer – of the friend, not of Linny – and a cat which is part-living, part-machine.

The sweet cover might lead one to think that this is a sweet and straightforward tale.  Sweet it is, but underneath that, Nesbet is tackling a number of thorny issues touching balance – balance between science and magic, between honoring tradition and finding what really works in the present, as well as balance in gender and its roles.  As my son noted when looking at the cover, Linny is a very nice person to spend time with as well, and the deep thoughts are underlying an adventure with plenty of narrow and failed escapes, as well as mental and physical puzzles.  This is a delight through and through.

Thanks to the publisher for providing an eARC through Edelweiss.

I'm a librarian and book worm who believes that children and adults deserve great books to read.
View all posts by Katy K. →
This entry was posted in Books and tagged musical fantasy, youth fantasy. Bookmark the permalink.

3 Responses to The Wrinkled Crown