This is the time of year when I’m reading much, much faster than I can write about all the books I’m reading. Here are two Cybils-nominated fantasies about animals. 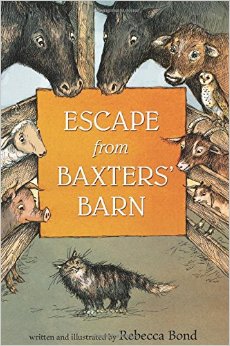 Escape from Baxters’ Barn by Rebecca Bond. Houghton Mifflin Harcourt, 2015.
When the animals of the Baxter brothers’ farm catch wind that the brothers are giving up on the farm, maybe even burning down the barn, there is panic. All the animals decide to work as a team to try to escape – including one-eyed Burdock, the barn cat, the only one of the crew who could leave on his own.  The barnyard setting and gentle plot make this a fit for younger readers, helped along with great line illustrations of the animals Nanny and Tick, Fluff, Mrs. Brown, Figgy, Tug and Pull.  It seems best to me for family read-alouds or advanced younger reader, as it has several potentially confusing elements including flashbacks and the idea of burning a building for insurance money, as well as some zesty vocabulary that might be confusing for young readers on their own.  This has a cozy, old-fashioned feel, and the distinct animal personalities and teamwork are appealing. 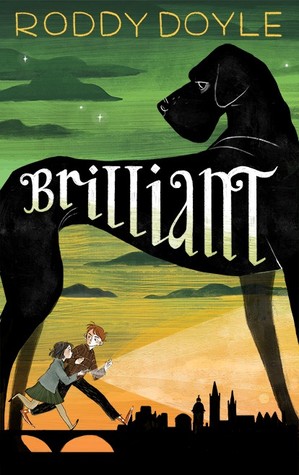 Brilliant by Roddy Doyle. Illustrated by Emily Hughes. U.S. publication by Harry N. Abrams, 2015.
Here’s another book with an old-fashioned feel – in this case, also distinctively Irish.  Raymond “Rayzer” and his younger sister Gloria were thrilled when their Uncle Ben first came to live with them.  They quickly discover that the reason he’s there is not so good – he’s suffering from depression, too weighted down to joke and play with them as he used to. While hiding under the kitchen table listening their parents and grandmother talk, they learn that Dublin is under the influence of the black dog of depression, which has stolen Dublin’s funny bone.  While the adults mean it as a metaphor, the children believe it to be real and set out at night to find and defeat the black dog.  They are helped by their teenage neighbor Ernie, who admits that he has recently taken a job as a vampire.  (Why a vampire? Because vampires are cool, of course! Ernie jokes about drinking blood in a non-fatal to the drinkee way, but doesn’t do so at all during the story.) All the animals of the city are able to see the black dog and give clues to the children, and Raymond and Gloria are joined by crowds of other children whose family members have been affected by depression.  Their only weapons are their determination and the word “brilliant.”  This is a quirky book, including things like the random vampire and illustrations of the children’s imaginings such as a sleeping giant under the stairs that groans when they step on the wrong spot.  It’s one that I quite enjoyed, but is definitely for readers who are in the right place for an adventure that’s half metaphor and half real fantasy adventure.

As always, this is my opinion, not that of the Cybils committee.

I'm a librarian and book worm who believes that children and adults deserve great books to read.
View all posts by Katy K. →
This entry was posted in Books and tagged animal fantasy, youth fantasy. Bookmark the permalink.