Queer as a Five Dollar Bill

I’d heard of Lee Wind’s blog, I’m Here, I’m Queer, What the Hell Do I Read before, but it took me a little bit to put this together with the nice guy I was chatting with at KidLitCon.  He told me a story about his publishing experience – how he’d written both a novel and a nonfiction book about the evidence he’d found that Abraham Lincoln was in love with another man.  The nonfiction book was scheduled to be published with a mainstream publisher, but was cancelled in 2016 because of the political climate. He self-published the novel, which I bought at KidLitCon (though my library also has it.) 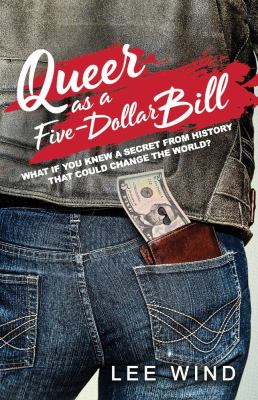 Queer as a Five Dollar Bill by Lee Wind. I’m Here, I’m Queer, What the Hell do I Read?, 2018.
As the book opens, Wyatt is up before school, aging copies of the Emancipation Proclamation to sell in the gift shop of his family’s Civil War-themed B&B, Lincoln Slept Here, in Lincolnville, Oregon.  He’s a target at school – even though he has decoy pictures of swimsuit models in his locker and hasn’t told even his best friend that he’s Gay. When she kisses him at school to save him from the major aggressor, Jonathan, she’s sure it’s the start of something real and he is just miserable.

Then, everyone is assigned to read a different book on Lincoln and start a blog, to be graded both on the content and the blog traffic.  Wyatt is given the book (it really exists) Joshua Fry Speed: Lincoln’s Most Intimate Friend, which contains letters between Lincoln and his best friend, letters that Wyatt is sure prove that Lincoln and Speed were in love.  Believing that someone as important and beloved as Lincoln could have been Gay is transformative for Wyatt. He writes his first blog post about it, still trying to look straight himself.

But he didn’t predict the backlash in the town that relies on Lincoln tourism.  Everything that he hoped would be solved gets much, much worse, putting him in worse danger at school and both his parents’ incomes on the line.  When he reaches out for legal help, it comes along with Martin, a very cute boy who posts his own Gay songs online. But does Wyatt like him for himself, or just because he’s the first openly Gay boy his age he’s met?

The traditional narrative here is interrupted with related bits of information – Wyatt’s video and blog posts for school, signs for the Lincolnville parade, transcripts of the radio and TV shows he ends up on, as well as polls, blog stats, and way his story is spreading. I’ll also note, for adults looking for books for teen, that there isn’t any content here that would be inappropriate for middle schoolers – though sexual orientation is a big issue, sexual activity is limited to a single kiss on the lips.

This is a really solid book with well-drawn characters.  I was really rooting for Wyatt as he struggled with everything on his plate – much more than issues of whether or not to come out. As I read this, I was thinking about a post on Rachel Neumeier’s blog, referencing an article by Kelly Jenson on Book Riot – basically saying that if we consider YA a genre that adults read, we can take out many of the things that make the books work for actual teenagers.  Here, Wyatt does some pretty believably dumb teenage things, from deliberately shorting out his laptop to hide his browsing history to believing that his best friend would dump him if he came out. (I’m a little afraid here that those fears might have been justified.) I loved him all the more for it. Here’s hoping this book finds the wide audience it deserves.

1 Response to Queer as a Five Dollar Bill